I think I mentioned a few weeks back that I was trying to wear heels more. I’ve managed to do pretty well with this. I kept a pair of heels under my desk, which I think were from Next. Actually, they are definitely form Next, I got them when I went for my first interview after graduating which was a long time ago. You can see them in this post. I’ve used them on and off over the years but never fully committed to them. I guess they are becoming a little worn now; the small heel seems to be fading away. I plan on getting some more use out of them as they’re easy to walk in. 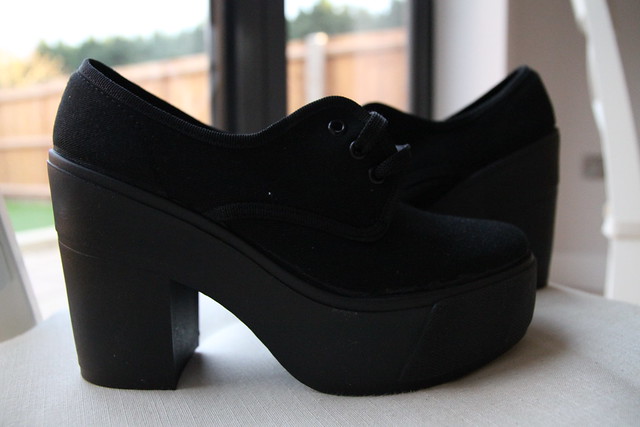 ASOS platforms
In aid of my new life in heels, or at least part of the day in heels, I decided I would get rid of some old shoes and replace them with something a bit less tatty and more up to date. My well-worn black, black and white Vans have gone in the bin, along with my Rocket Dog boots. I’ll probably end up replacing all of these, at some point, especially the boots which are fab for winter. If I try to focus on buying shoes with a heel then I think I’ll be forced to wear them more often. I still have a lot of Vans and Converse, so I wont be lacking in the pumps department. 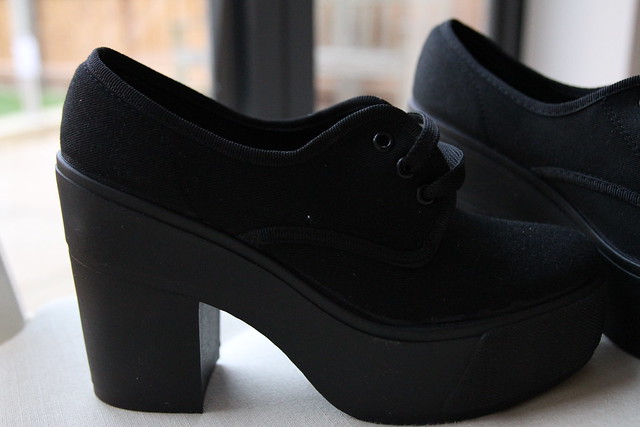 Two new pairs of shoes arrived for me on Thursday. I got one pair from ASOS. It’s been a while since I saw anything I liked but after catching up on Sandra’s blog I knew I had to see what they were like IRL. Luckily, I managed to save a little money this month and as these platforms were only £30 I didn’t feel too guilty. The platforms are much higher and much more comfortable than I had anticipated. I’m pretty sure I’ll keep them; they seem to have had a lot of thumbs up on Instagram. What do you think?
In my next post I’ll be sharing my new Irregular Choice shoes with you.
xx
0
Facebook Twitter Pinterest
LinkedIn Email