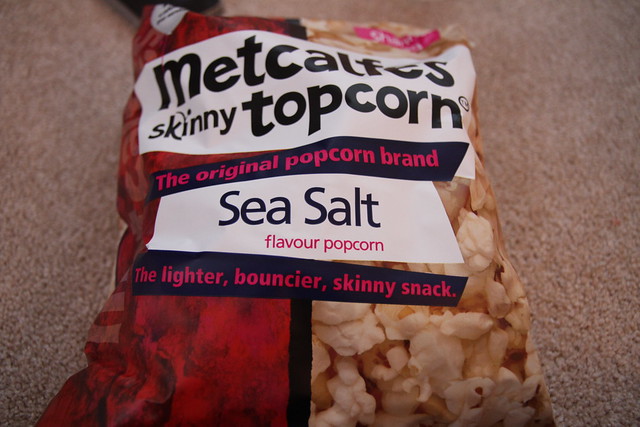 Hi, did you all have a good day? I’m in the mood for watching lots of films this week, which is something I don’t do often. I was thinking about what to watch when I remembered that I meant to tell you about this big bag of sharing popcorn I grabbed in the supermarket the other week. I’m not a big popcorn fan so it may seem strange that I decided to buy a bag of it, but I keep seeing this brand knocking about and as I love all things salty I thought I’d give the Sea Salt flavour a go!

This bag of popcorn doesn’t disappoint  if you’re looking for something salty… it’s real salty! It was actually a bit too salty for me so after demolishing half the bag I thought I should probably stop and gave the rest to my mum and sister who managed to get rid of it pretty fast. In terms of the actual popcorn, it..well it was as you would expect light and crunchy – can you really go wrong with it?

Popcorn is a pretty handy snack to keep in the house and Metcalfe’s popcorn claims to be healthier than others and use all natural ingredients which is aways a good thing. I just had a quick look on the website and those who count calories may be interested to know that a bag has 108 calories in – I’m not sure how many the sharing bags have…but remember – they are for sharing!

Would I buy this again? If I was in a popcorn mood then yes, but I’d probably try a different flavour. They have a wide and unusual range of flavours so I think I’d go for the Sweet Cinnamon one next or maybe the Wasabi orrrr the Chocolate Crackle. I think I’ll have to close my eyes and pick, they all sound pretty yummy.

Now back to picking films to watch for the week or maybe starting a new series – I’ve been meaning to see what all this Breaking Bad hype is about!