A few weeks ago I attended to a juicing event in Leeds. The day was hosted by Currys and 54 of us bloggers were invited over to try out the Phillips juicers. I’d never used a juicer before but have been making smoothies for breakfast every morning since the start of the new year so I was very excited to find out more about juicing.

I met up with lovely Sophie at the station before the event so we could have a catch up and prepare ourselves for a day of juicing and yoga. 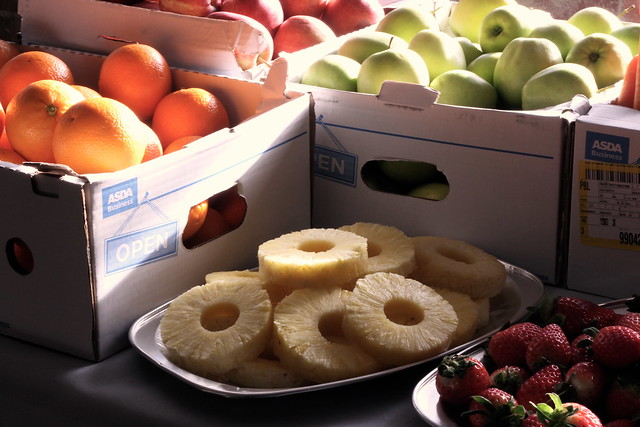 At the event we were spilt off into groups for the day. I was with Lucy, Siobhan, Sian, Kellie, Sophie, Bryony and Steph. My group kicked things off at the mocktail station with Nick from Lambert’s Yard. Nick put together a ginger, cucumber, apple, carrot and beetroot juice. I thought it was delicious and I’ve since been adding beetroot into a lot of my morning juices.

It was then over to us to put together their own mocktails. Sian managed to create a mojito using spinach, lime, apple and cucumber (I think). Adding ginger and mint leaves to this would also be a good option. 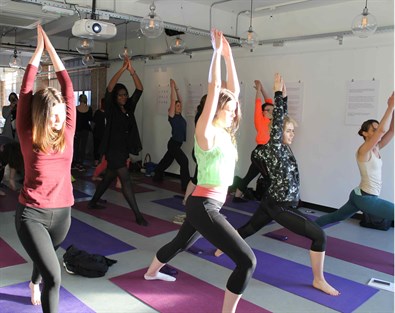 We then moved onto a yoga session with Amanda. Since the new year I’ve been getting to a yoga class once a week at my gym but as I’d been suffering from a headache for most of the morning I decided to do the beginners session. I was hoping a little concentration and relaxation would tame it. Amanda actually specialises in Rocket Yoga which is a fast paced flow of yoga. I’d never heard of it before but after watching the girls take part I’m keen to try it. Oh, my headache did ease off after the yoga session, I think it was the relaxation right at the end that really helped. 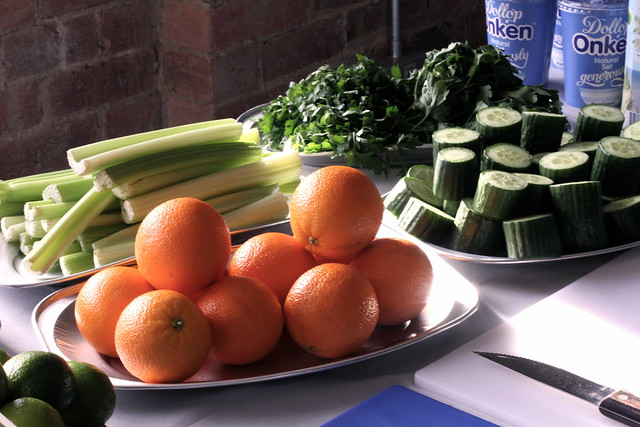 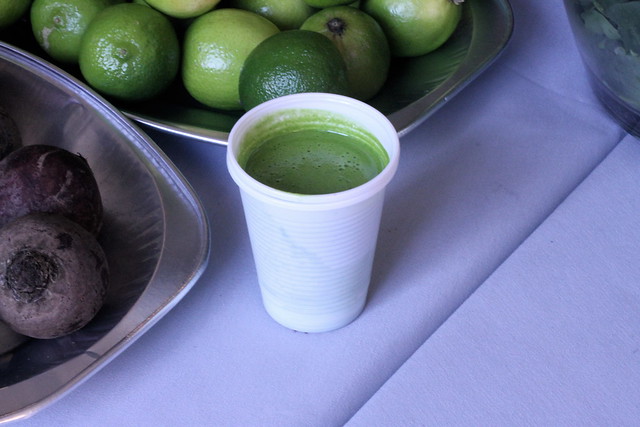 After the yoga session I quickly changed and headed over to the third station. This was our chance to try out the Phillips juicers and make our own recipes. As you can see from the photo, my juice turned out very green, but that’s what I was aiming for. I’m probably the only person who would like this juice, I really like things with a bitter taste. My juice was made up of lime, spinach, cucumber, a little coconut water and an apple. If I was to make it again or for friends I’d probably add more spinach and a few berries.

The Phillips machines are really easy to use. I’d advise you to remove the skin of thicker fruit such as oranges but apples, lemons and limes go into the machine with ease. No juicing machine is fun to clean but with many parts safe for the dishwasher it makes it much easier. The sieve can be cleaned pretty easily with a brush, I have a similar one at home and haven’t had any problems. I try to clean up my machine straight after making my juice, it saves any hassle later.

We then enjoyed a quick spot of lunch and a natter. There were two soups; mushroom and truffle and chicken and lemongrass. I went for the chicken soup and it was delicious, the hunk of fennel bread was really good too. I’d love to know where they got that from. 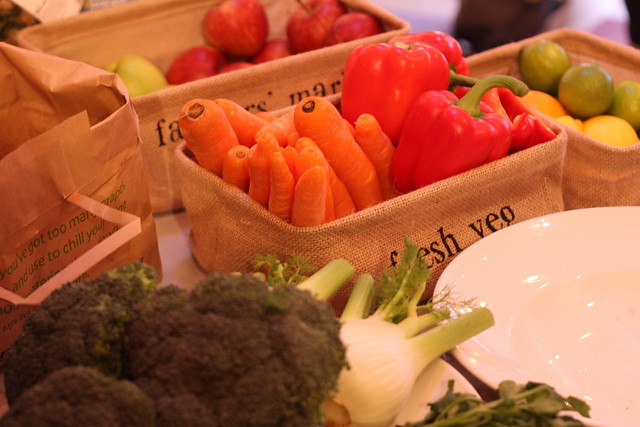 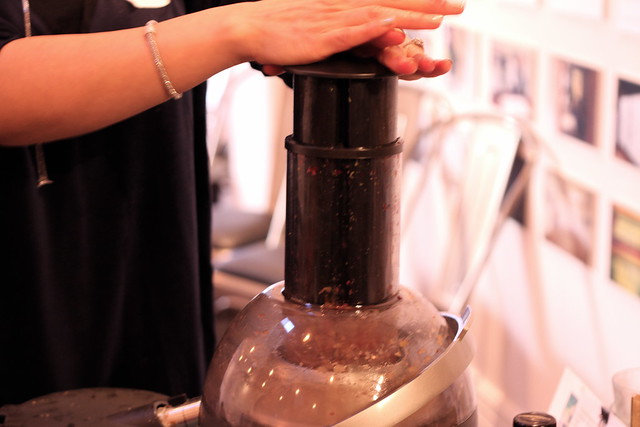 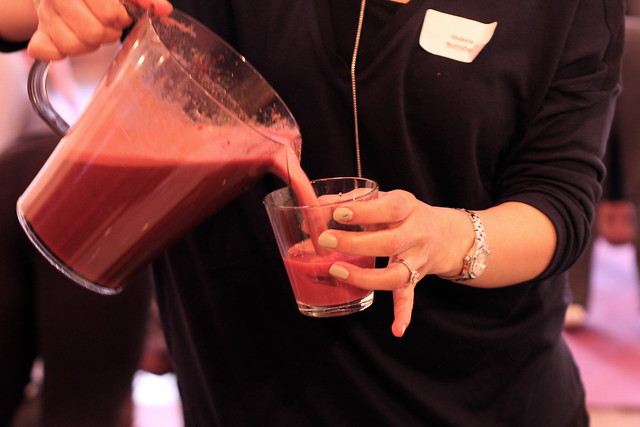 The final station was with nutritionist, Shakela Shan. Shakela put together a couple of juices using a mix of things such as fresh turmeric, broccoli, fennel and other vegetables. I loved all of the juices she made, I think it makes eating vegetables very easy, it’s also nice having someone whip them up for you. Honestly though, it’s worth putting the effort into making a fresh juice. 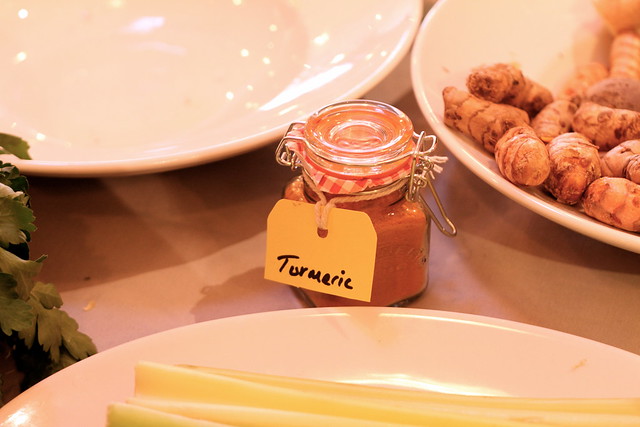 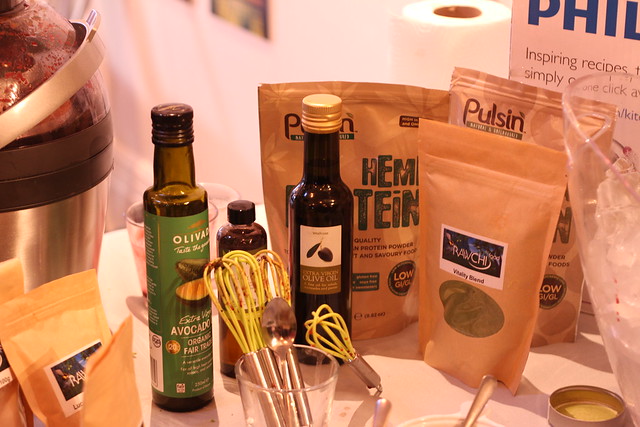 Shakela also told us all about the different oils and seeds that can be added to smoothies and juices. You can’t taste the addition of oils into your juice. I added a dash of flaxseed oil to mine because it’s meant to help with eczema. I’m actually on the hunt for some as Waitrose and my local Holland & Barrett didn’t have any. I’d also like to try matcha powder and chia seeds soon.

Be sure to check out Currys blog post about the event, they’ve put together some juicing recipes which you may like. I also want to say a big thank you to Joe Blogs for running yet another fantastic event.

So, have I kept up with juicing? Yes, I’ve switched from using my smoothie machine to the juicer that my parents dropped ’round the other day. I really enjoy starting my day with a healthy juice and then heading off to the gym. I still use my smoothie machine when I’m making drinks with kale or avocado in. I find that adding any of the following to ensure that your juice tastes delicious; apple, pineapple, lime, lemon or ginger. I personally haven’t had a juice I didn’t like, but I’m a huge fan of fruit and veg (shame I also love bread too).