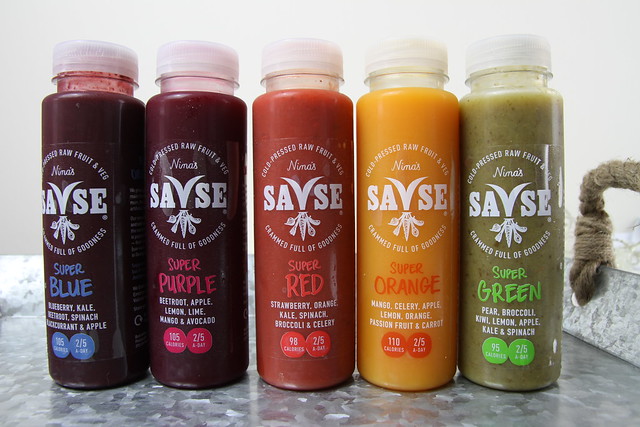 Today I’m here to share the 100% natural, cold-pressed Savse Smoothies (pronounced sav-say). I was kindly sent the full selection to test out but you can find them in places such as Boots, Waitrose, ASDA, Whole Foods and more. They actually have a handy map on their site where you pop your postcode in and it will locate your nearest stockist.

Guka Tavberidze launched Savse Smoothies back in 2013. Guka’s mum, Nina discovered she had an iron deficiency while pregnant 30 years ago and spent his childhood making delicious smoothies. They decided to take her original recipes, bottle them up and share them with the world.

It’s so good to finally start seeing smoothies and juices on the supermarket shelves without added sugar and preservatives. Savse Smoothies even contain 2 of your 5 a day, that’s pretty good. They’re very drinkable and a smoothie is an easy way of getting ahead of your daily fruit and vegetable intake. 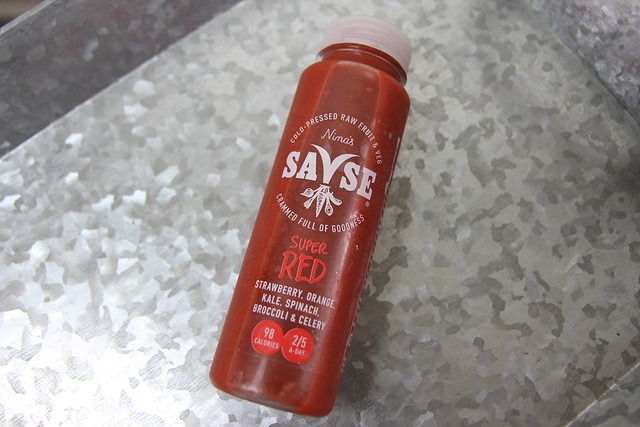 I really enjoyed each smoothie and thought they were all particularly easy to drink. Even if you’re afraid of vegetables, these will be an easy way of getting more greens into your body. I found that the vegetables were well disguised within each drink, apart from the ones with beetroot in. The beetroot ones had an earthy base to them, as you would expect.

I used a couple of these smoothies on early morning train journeys and then the rest after my gym sessions. I found them quite filling and they really helped to replenish my energy levels after working out.

This smoothie had a very light earthy taste to it but the bitter/sour blackcurrant taste overpowered it. I’ve probably mentioned before that I do enjoy a bitter taste, I’m one of those rare people who loves grapefruit and gooseberries. I couldn’t detect the greens in it at all. If you’re not a fan of bitter tastes then I’d suggest giving this one a miss and going for Super Green or Super Orange.

Although this was quite a bitter smoothie I really enjoyed it and found it smooth and cleansing. I would buy this again for an energy kick after my workout.

This smoothie leads with apple (62.9%) but the beetroot flavour overpowers it, as you would imagine. It has quite an earthy taste but balances out well with the sweetness of apple and mango. I couldn’t detect the avocado within the drink but as there was only 0.1% of it in there I doubt many people would.

I really enjoyed this smoothie, it felt cleansing and refreshing. I’d happily start my day with it again.

This one felt like a real treat. I couldn’t detect the greens in it at all. It had a very sweet taste with a slight tang. This smoothie honestly tasted just like freshly picked strawberries.

Although this isn’t something I’d drink on a daily basis (I eat a lot of berries) it’s something I’d pick up for a refreshing treat and energy boost after the gym. I also think it’s a perfect drink for a picnic on a sunny day. I wish I had one now actually!

This is another smoothie I would buy as more of a treat. It’s delicious, refreshing and sweet. However, it contains the most calories out of the collection (110). It has an apple base (36%) but the mango and orange flavours really outshine it. I couldn’t detect the celery which is strange as when I use it at home it adds a strong peppery flavour to my drinks. Just like Super Red I think this would be refreshing on a sunny day, let’s hope we get lots of those this year.

This is a smoothie I would drink after my gym sessions but not in the morning.

This is one of the best sellers from the Savse Smoothies collection and the lowest in calories (95). As soon as I tried it I knew why it was so popular. This smoothie is not as sweet as the others, despite apple (39%) and pear juice (19%) being the two leading ingredients (broccoli pulp 16% coming in third place). I couldn’t detect each different green within the drink but it did taste green and healthy.

I thought this was really tasty. I’m a big fan of green smoothies and it’s one I’d happily start my morning with.

I honestly didn’t dislike any of the Savse Smoothies. I do wish there was one which was a little more vegetable heavy though. Overall I love the selection of Savse Smoothies, there’s a good mix of fruit and veg and I think that most people could pick out 2 or 3 from that collection which they really enjoyed. I think this smoothie collection is a good way of easing people into embrace veg but still keeping the drinks sweet and fruity. Let me know if you give them a try.

Do you prefer a fruit or vegetable based smoothie?