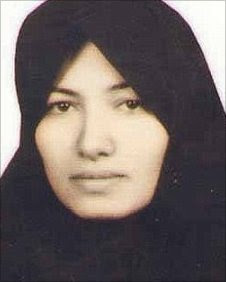 I use my blog for an outlet of happy thoughts, images and what I have been doing! So this morning I am going to take a minute to not focus on me and my happy images and snap back into reality, into the real world. There is so many things going on around the world that are wrong, injust and unfair.

I heard on the news that Sakineh Mohammadi Ashtiani, an Iranian woman had been sentenced to death and in France there had been rallies against this… So, lets get this right, I found out about the awful news because of people who are against this happening, good people…who care ! Well it just goes to show, if we stand up for what we believe in then we can make a change or at least raise awareness !

Sakineh’s sentence has been put on hold following an international outcry !

A little info taken from the BBC News website:
Hundreds of people have held rallies across the world in support of an Iranian woman sentenced to death for adultery.

In London, campaigners protested against what they described as “medievalism and barbarity”.

Remember that we can make a difference… I have a few more things I want to say about making a change and a stand to what we believe in, but I don’t want this post to distract from the news about Sakineh Mohammadi Ashtiani!