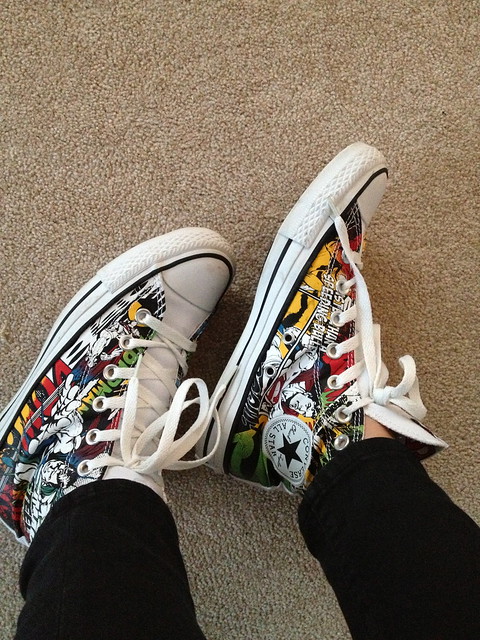 Have I shared my super cool Superman Converse on the Prettygreentea before? If not, then it’s probably because I don’t think to share my slippers on my blog. Yes, I have a pair of Converse to wear indoors only. I’ve done this for a good few years now, since I was at uni actually. I think that probably happens to a lot of people, living in a house share just isn’t the same as being at homehome.

I find a real pair of shoes much more comfortable than wearing slippers. Over the years I’ve switched from Primark pumps to Converse, depending on my income at the time. I rarely see slippers that I like and as I can be a bit clumsy I stay far away from those oversized novelty ones that seem to be all over the shops at Christmas time. I’ve had a few pairs form Next and although they’re pretty they don’t seem to last long and this is why I have a pair of ‘house shoes’.

These Superman kicks have been knocking about my house for about a year. I was tempted to wear them out because they are just so cool but in the end I decided that they should be house shoes. Why? Well, because I’m a grown up, late twenties init? …I kid, I’ll happily wear these out of the house at some point but but for now, they’re my ‘slippers’ and look cool with my pjs.

I’ve been thinking about what I’ll use over the winter months and I can’t quite believe I’m saying this but, I’ve been thinking about saving to get a pair of Uggs. The reason I don’t like the idea of ever wearing Uggs outside is because they just don’t last long. Those who try to make them last end up walking on the side of their foot, we’ve all seen it and we know it looks silly and is terrible for your feet. However, they are comfy and if they’re kept for indoors use then they aren’t going to get ruined quickly. Saying that, £70 is a lot to spend on ‘house shoes’.