Morning! I thought we would start the week off talking about tea. I saw these strange bottles of fruit tea in the supermarket the other week and tweeted a photo, as you do. Not many people knew what they were but Terri seemed to be ahead of everyone and gave a nod of approval. A few days later the team at Fruitbroo kindly sent the full tea selection over for me to try out.

Since taking this photo I’ve managed to test the full range and even experimented with mixing some of the flavours. 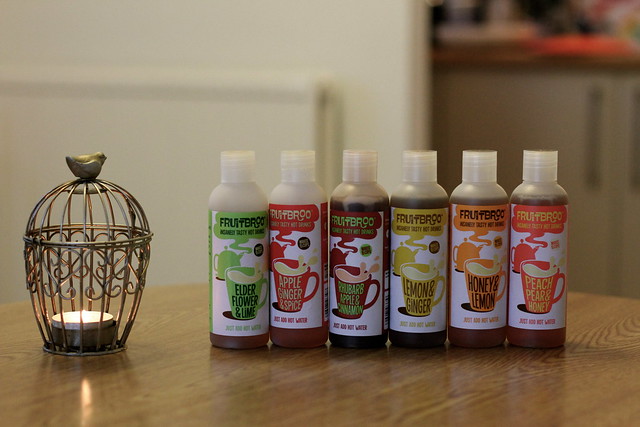 These cute little bottles are filled with 100% natural fruit tea. They decided to ditch the teabag because they couldn’t create anything juicy enough. Mike Brehme (he set up Clipper) came up with the clever idea of mixing fruit juice with herbs and spices to create a delicious caffeine free tea. They’ve done a very good job and these bottles are handy to pop in your bag if you travel around a lot or to keep at your desk.

One bottle makes 15 cups but as I only use one teaspoon I’m pretty sure they will last much longer. It’s actually the perfect time of year for fruit tea. They are very warming and you don’t have to worry about drinking too much caffeine.

As you can see, there are 6 flavours in the range and I’ve really enjoyed all of them. At first I thought some of them were going to be too sweet as I added the suggested amount of 2 teaspoons into my hot water. I now just stick with one because you still get full flavour without it being overpowering.

The Rhubarb Apple & Cinnamon flavour was much nicer than I expected and I think it might even be my favourite, though Peach Pear & Honey is also tasty and then so is Elderflower & Lime…oh they’re all nice! I think that flavours such as Honey & Lemon and Lemon & Ginger are going to be perfect for when I have a cold.

A little birdie told me to try mixing the flavours. Pech Pear & Honey with Elderflower & Lime works so well, they were made for each other. You should give it a go and I’ll keep you updated via Twitter when I’ve tried mixing the other flavours.

You can find Fruitbroo in Sainsbury’s or simply order on their website (free delivery if you order over 10). Their website is fab so it’s worth checking out.

Which flavour do you like the sound of most?