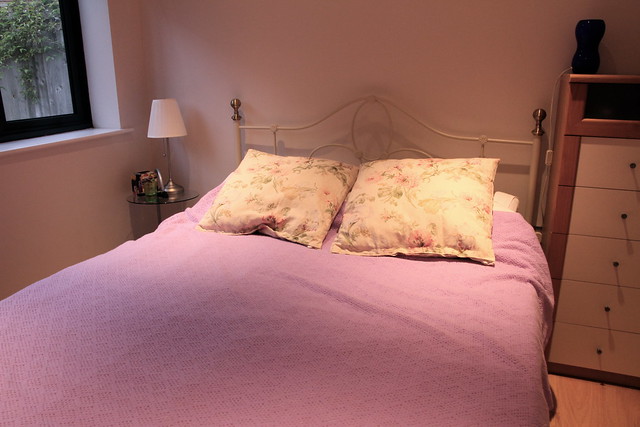 In a few months I’ll be moving to Sheffield. For me, a new home means an opportunity to have a big clear out and a chance to invest in a few new things. I think it’s important to make your rented property feel like a home, and for me that means refreshing or replacing old furniture and home-ware bits twice a year. Sometimes I stick with cheap and cheerful items and other times I’ll go for investment pieces.

This time ’round I’m keen to focus on whites and pastels throughout the home. I’m hopeful that we will move into an apartment and not a house. I’ve realised over the last year that I much prefer living in an apartment whilst I’m city based. It fits well with my current lifestyle. When I’m renting I like the place to be fresh, modern and safe – new apartment blocks usually fit in with this.

I’ve already taken a rag-bag to the charity shop which has included a few sets of bedding. I’ve had some cheap and cheerful duvet covers from Primark which were very pretty but obviously the quality wasn’t so good. They did the job for a year but it’s time for a change.

My plan is to invest in two good quality sets of bedding just before the move. Homebase have a fab selection of brands, including my all time favourite – Habitat. I’m pretty sure I’m going to go for two white sets from Habitat but I’m also tempted by the blue set. I’ll probably pick up a couple of season themed sets from Ikea to ensure I have a variety to alternate between.

So, my main focus is going to be white bedding with hints of pastel shades from pillows, cushions and sheets. I even fancy making my own cushion covers, it’s been a while but it’s something I used to enjoy doing.

I have some fantastic over-sized cushions which are handy for when you’re reading bed. These will go with the white/blue duvet sets so I wont be changing them. I’ll also be keeping my throws and toppers because they’re all good quality and classic colours, especially the ones I have for the winter months.

What’s the most you would spend on a duvet cover set?