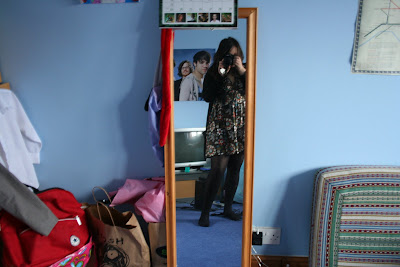 I think if you click the photo it gets bigger. Oh and before you comment on the poster – it’s my sister’s bedroom.
The dress is from Popboutique in Manchester.
It was a dull day and I was just popping to town with my friend -who is going away next week back to being a holiday rep 🙁
I had a nice afternoon in town and came home with these yummy cakes for my mum and sister ! 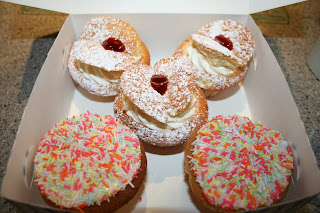 I also wanted to talk about white poppies. I had not seen or even heard of them untill my grandma was wearing one with her red poppy the other day they stand for:
“The White Poppy symbolises the belief that there are better ways to resolve conflicts than killing strangers. “

The first white poppies were produced in 1933 by The Women’s Co-operative Guild – The white poppy was not intended as an insult to those who died in the First World War – a war in which many of the women lost husbands, brothers, sons and lovers.
So the Great was was mean to be ” The war to end all war” and it was not.
I dont want to go into too much detail but just to bring white poppies to your attention. I was shocked how many people don’t understand white poppies. I only found out about them the other day, but I’m so happy I now know what they are, stand for and had the chance to research them a little more. It would be nice if more people knew about them, and also for the correct reasons.
I will now choose to wear a RED and WHITE poppy. I do think we should and must respect those who died and all the grief ( which is what the black centre stands for) and I also think we should want war to end.
Put “White poppies” into google and see what you think…
x
0
Facebook Twitter Pinterest
LinkedIn Email