“Well this is nice” said Emma as we entered a palatial hotel lobby having passed through a one ton revolving door, at this point after a few hours of travelling it was late (around midnight and we had been to my sisters wedding the night before), so even the grottiest of hotels would have seemed worthy of our praise. 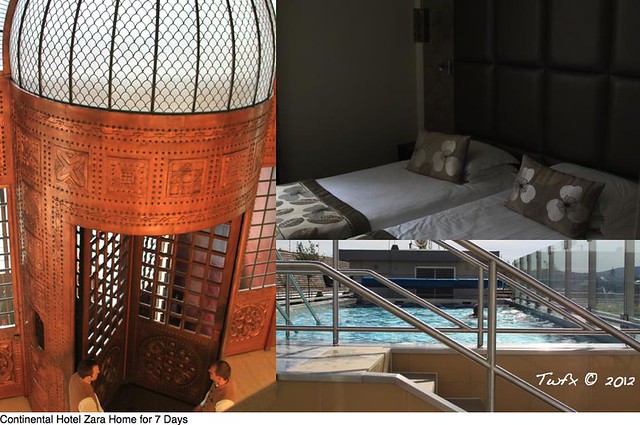 Our hotel (Continental Hotel Zara) was located in the hip and stylish Jewish quarter on the Pest side of Budapest. I realise I’ve started off without introducing myself while at the same time hijacking our usual blog service from our Persian speaking friend (Daisy for the misinformed). I’m Richard Till, Daisy’s long time friend, fellow DSLR toting geek squad member and an intermittent travel companion. 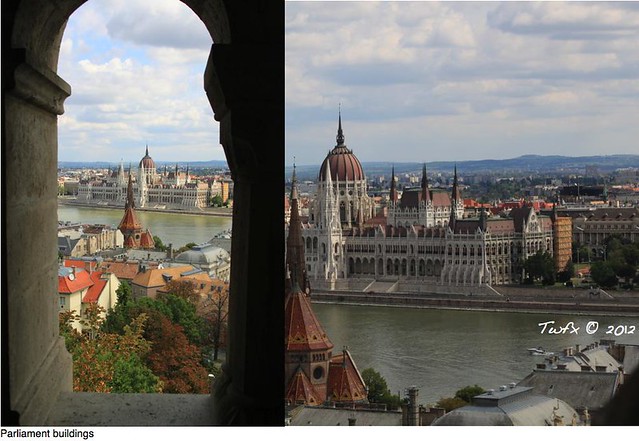 I’m conscious that like most people with the gift of the gab, that I’m rambling so let me give you the facts: 7 days in Hungary’s capital city Budapest, the countries largest city with around 1.7m in the centre and further 2.5m people in the surrounds that make up Budapest. Budapest centre being made up of two opposing sides Buda and Pest which are separated by the Danube which is intersected in numerous points by the statuesque collection bridges most impressive of which being the chain bridge.
So what does one do on a 7 day citybreak to Budapest? well like most other citybreaks: eat too much, drink too much and rush around taking pictures of the cityscape and its sites from every angle and altitude. Budapest however, is different as it is the only capital in the world to not only have these great sites but also a thermal torrent running underneath its core, which means it has a plethora of baths which draws tourists in from far and wide. So in the city of spas, we toured the city in our 7 days taking in all the sites, there are a few which I will share with you, our trip to the largest baths in budapest Szechenyi Bath, the gardens and fountain on Margaret Island and the cities vistas from Gellért Hill.
Margaret Island a 1.4 mile long island nestled in the middle of the Danube has various landmarks on it; the picturesque art nouveau tower ‘Víztorony’ a 57m high octagonal water tower built in 1911, an open-air theatre and a fountain that dances along to a selection of 12 background songs. The most impressive feature dates back to when the royal family decided to turn Margit-sziget (Margaret island) into an ornate garden. Despite the heat of the summer, this contains some of the best kept green lawns, beautiful plants and flowers. 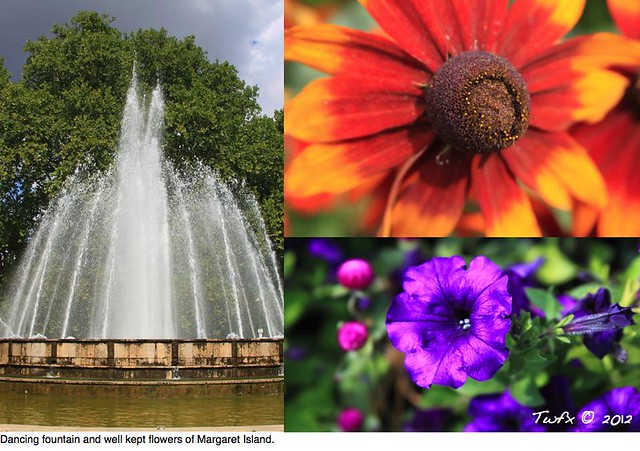 Szechenyi Bath the first bath on the pest side originally opened as “Artesian Bath” in 1881, only in 1913 was it made permanent and renamed Szechenyi bath. The bath is not only the largest, but also in my humble opinion the best looking both outside and in with its charming yellow external cladding and impressive domed roofs . The Baths has an array of pools with temperatures varying from the shockingly cold 16’C to the alarmingly warm 40’c. Accompanied by Saunas, steam rooms and two massive outdoor pools, it represents a complete day full of relaxation, oh and the ice creams good too. 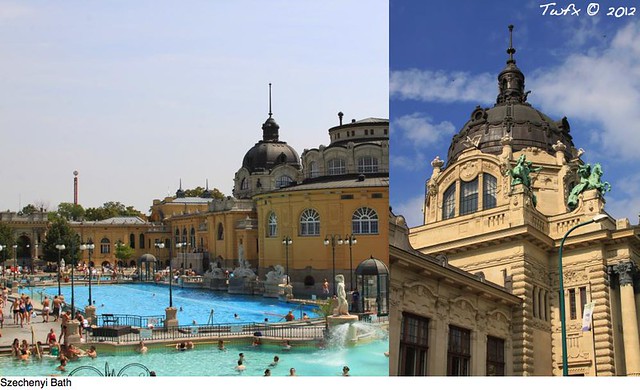 Gellért Hill at around 140m above sea level, named after Bishop Gellért (Gerald) famed for his mission spreading Christianity to Hungary. First tip don’t walk up the hill like we did at 12noon (traditionally the hottest part of the day) in the summer when its 35’c. Gellért hill is usually where the locals go for a Sunday afternoon hike, the wonderfully steep and windy paths slowly take hikers to the best views in budapest, from here you can see the whole of the pest side in a wonderful panorama including the Chain bridge, parliament buildings, ST. Peters basilica. 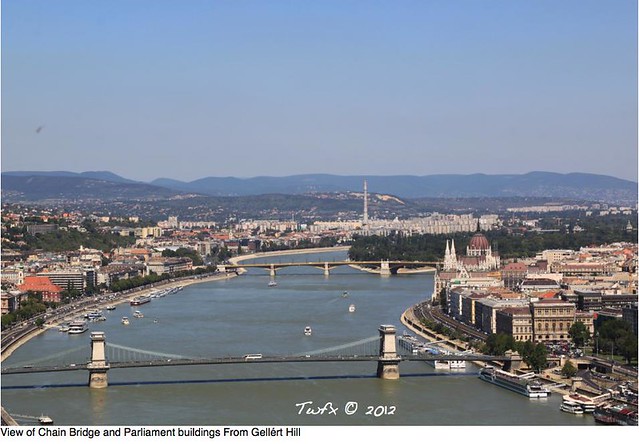 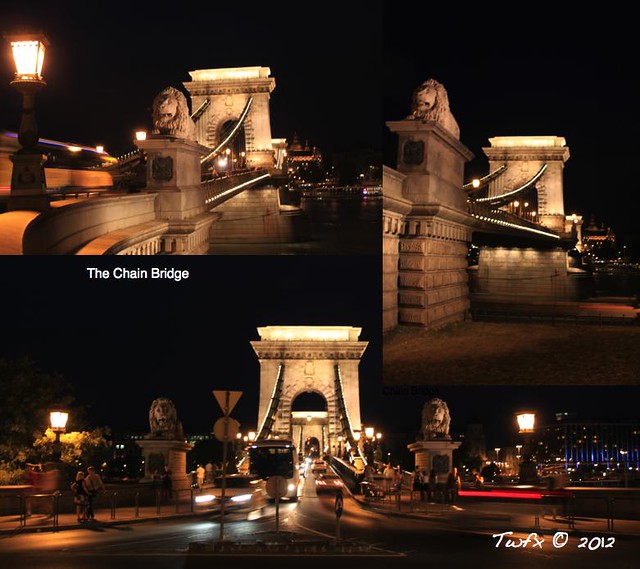 Finally I would like to share with you if I may, the fascinating culinary delights of Budapest from goulash and noodle soups to lángos (yeast-based dough deep fried in oil topped with sour cream, cheese and your choice of toppings).

Budapest while it is famed as the city of spas, it should also be known as the city of cakes. We sampled various ones but our favourite were Kürtőskalács. These are tube-shaped, sweet bread rolls covered in assorted toppings from traditional cinnamon to coconut and chocolate. Watching them being made is almost as good as eating them. They roll out the dough then wrap it around a wooden dolly which is then rolled around a flame to bake. Once cooked they dip it into the topping and its ready to eat.

To sample a taste of the real Hungarian cuisine, the Old market hall is the best place to start. This is where all the locals come and buy their supplies. The building itself is equally as impressive as the wide selection of food stuffs on sale. Paprika bunches, gargantuan watermelons and of course stalls selling local dishes extremely cheap (dishes priced around 600HUF £1.70/2.10€/$2.70). A stroll down any of the cities many restaurant lined streets will reveal, like most other cities, every European cuisine and more. The price brackets are varied and there is something for everyone.

Getting to budapest couldn’t be easier now. All major airlines are flying in and out of Budapest’s main airport (Ferihegy International) and it has well established transfer links into the centre. An ‘airport shuttle’ a minibus airport transfer company who will take you from the airport to any address in the centre of Budapest for a flat fee which at time of writing is £15/$23/18€ (www.airportshuttle.hu). 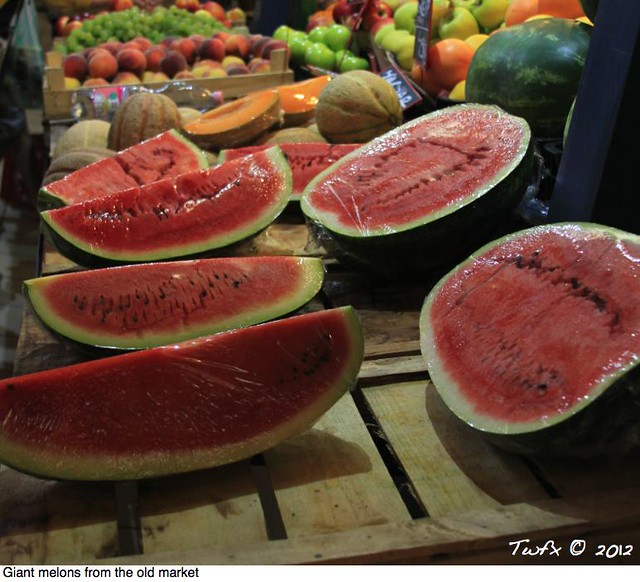 Hotel and Hostel options in budapest are plentiful. There are high end places such as, Hilton budapest westend, Continental Hotel Zara (where we stayed) and Corinthia Hotel Budapest to budget hotels like Ibis, Easyhotel and Novotel. Hostels can be found easily and are a very good option if traveling and wanting a more laid back option. I can recommend Marco polo hostel which spans five floors and is centrally located.
One thing to note is that picking a cheaper but further out hotel is not a bad option. The whole city is well connect by metro, tram and bus network. 1, 3 and 7 day passes are available from stations and some shops for the public transport network. This is a good way to get about and means a hotel just outside of the main area can still be a useful base for exploring the city.
I have loads more pictures from our trip on Flikr. Ohh and FYI normal service will resume from Daisy next.
Richard Till – follow me on twitter @twfx for more odd ramblings and irrelevant links.
1
Facebook Twitter Pinterest
LinkedIn Email