Throughout April and May I’ve been loving coconut. I’ve used Koko’s coconut milk in my porridge, Coyo for cooking, Burt’s Bees foot cream and Under The Palms from Yankee Candle. I’ve mentioned a few of these things on the blog before but today I’ll be focusing on my favourite dairy free yoghurt and summer candle.

First up I’m going to talk about Coyo. It’s is a dairy, soya, lactose and gluten free yoghurt. Oh, there’s also no added sugar. I know it sounds like all the fun has been sucked out of Coyo, but trust me, this stuff is delicious.

I don’t personally see this as an alternative to yoghurt. I wouldn’t eat it in the same quantity as with yoghurt because it’s very rich and filling. I see this as more of a fancy yoghurt you indulge in from time to time. It’s a fun addition to breakfast, cooking, baking and of course, sneaky spoonfuls straight out of the pot.

The first taste of Coyo is unusual, in a good way. It have a very thick texture, similar to Greek yoghurt but heavier. It’s rich, creamy and silky. I find that it tastes good on its own, with grape nuts (other cereals too) and my favourite way of using, as a marinade.

If you’re not a fan of coconut then I’d suggest staying away from Coyo and letting us coconut fans deal with this one! Let me know if you’d like to hear more about the different ways I use Coyo in cooking. 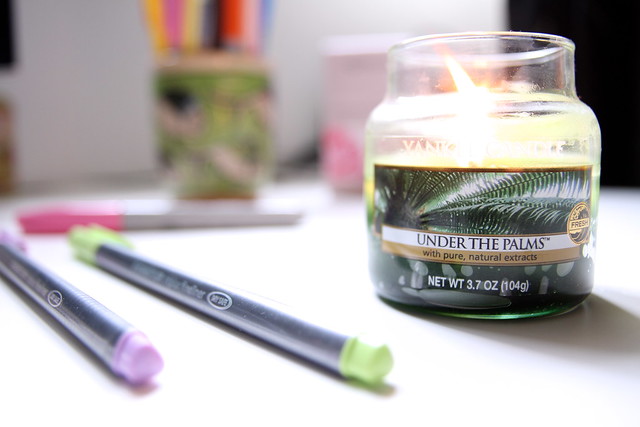 Next up is the pretty green Yankee Candle in the photo. Under The Palms was sent to me a few months back and I’m sure I’ll be repurchasing it to burn throughout the summer months.

This candle has a clean summer scent with the main notes being coconut and sea grass. These work well together and create a fresh yet fruity scent. Whenever I burn this I always end up dreaming of past holidays.

I’ve mostly been burning this candle in my office and the lounge. It always gets lots of compliments and the scent tends to last a day or so although it’s not at all overpowering.

Anyway, I best be off as I have some work to finish and need to stop putting Croatia into Google.

Where would be your dream holiday destination for this summer?