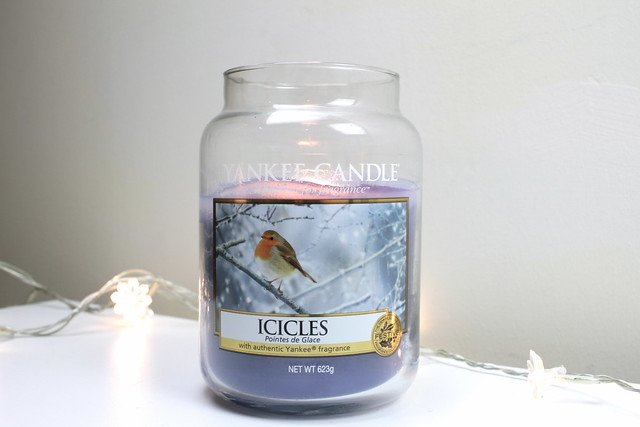 Throughout December I’ve been burning the Icicles candle from Yankee Candle* and I really like it. Nothing will ever beat Sparkling Cinnamon, that’s my all-time favourite, but this is a very close second. It’s a candle I will repurchase and hopefully they will do a melt version of it for the Scenterpiece.

Icicles has a lovely crisp scent with notes of spicy cinnamon and pine. It gives off a strong scent and fills the room quickly, but I still leave it burning through the evening because it makes the room cosy. I haven’t found it overpowering, but I am burning it in a fairly large space. If you’re burning it in your bedroom or a smaller space then you may only need to burn it for an hour.

This is one of those candles which you have to light and burn to really get an idea of the true scent. Just opening the lid doesn’t do it justice.

I also like the colour of the wax and the sweet little robin on the label of the jar. I think it adds to the cosy and calm feeling which the candles emits.

I’d love to know which candles you’ve been burning throughout December, let me know in the comment section below.