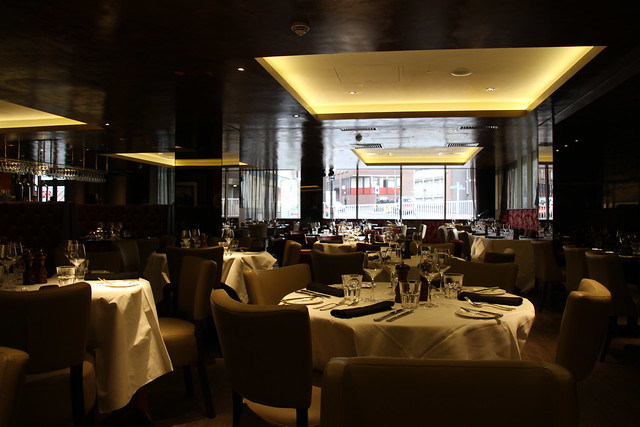 The other week Phil and I were invited to try the new menu at Marco’s New York Italian in Sheffield. We’ve been big fans of Marco’s ever since I reviewed their afternoon tea last September. It’s one of our favourite places to go for an evening meal in Sheffield.

Last Sunday we made our way to Marco’s to try out the new menu. It’s filled with lots of exciting dishes so it took us ages to make our decisions. I’d suggest having a look at the menu online before you go for your meal. As always, the food is Italian themed with a New York twist (two of my favourite holiday destinations).

Marco’s New York Italian in Sheffield has a relaxed atmosphere and the staff are always on hand to help with menu decisions. Quality customer service is very important to me, I’ve now been to Marco’s countless times and have never been let down. It was very quiet when we arrived at the restaurant but I think this was due to the cold weather. Although the restaurant seems out of the way at first it’s really just a 10 minute walk from the city centre Cathedral tram stop, if that. 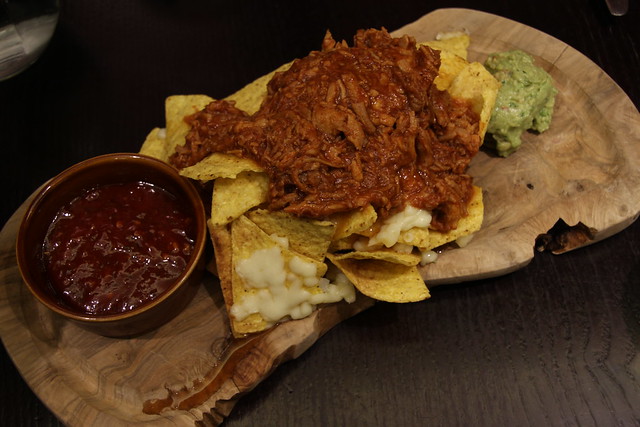 To start there was no stopping Phil from picking the Hickory Smoked Pulled Pork with Nachos. This is definitely a starter to share. There was a pile of salty nachos with a generous helping of tender pulled pork. The nachos were topped with cheese, guacamole and a side of homemade salsa. I really enjoyed the homemade salsa, it had a good kick to it. The pulled pork was succulent and delicious. It’d been a good few months since I last had pulled pork and I can assure you that this didn’t disappoint. The only thing that we both felt could have been improved upon is a larger serving of guacamole. As you can see in the photo, the guacamole looks a little lost next to the nachos. 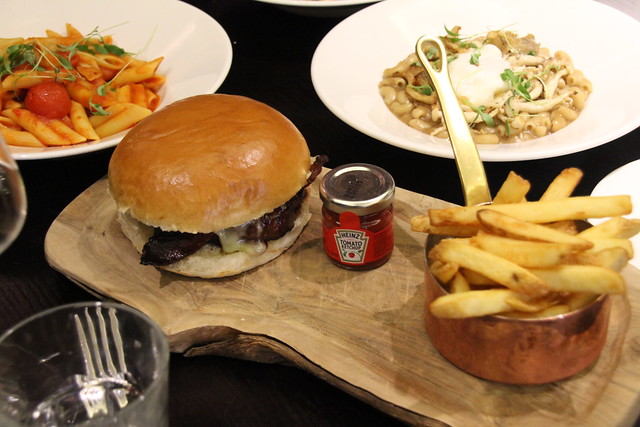 We picked out a few dishes to share for our main so we could really get a feel for the new menu. We were presented with the Macaroni Di Fungi and Penne Arrabiata. Both of these dishes were the starter size but they also come in a main size too. As if that wasn’t enough there was the Great American Burger and the Panznella Salad for a refreshing side. These dishes were all picked with help from our waiter who was very friendly and had full of knowledge of the menu. 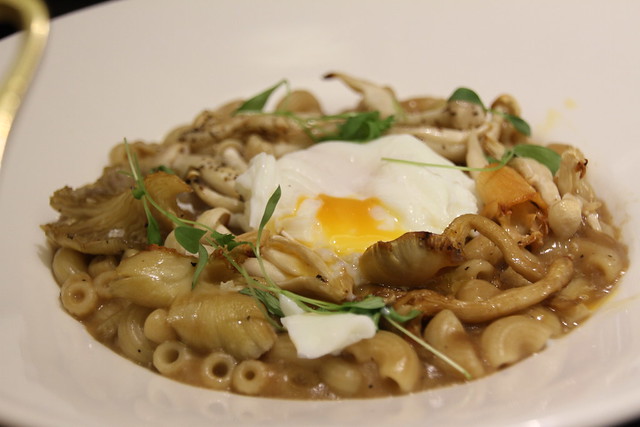 The Macaroni Di Fungi went down very well. It’s a very mushroomy dish, which I loved. We both adore mushrooms and enjoyed experiencing the different textures within the dish. If I wasn’t back to avoiding dairy I would pick this on my next visit. I personally think that the starter size is a large enough portion for a main combined with a side if you’ve had a starter or plan on going for a dessert. 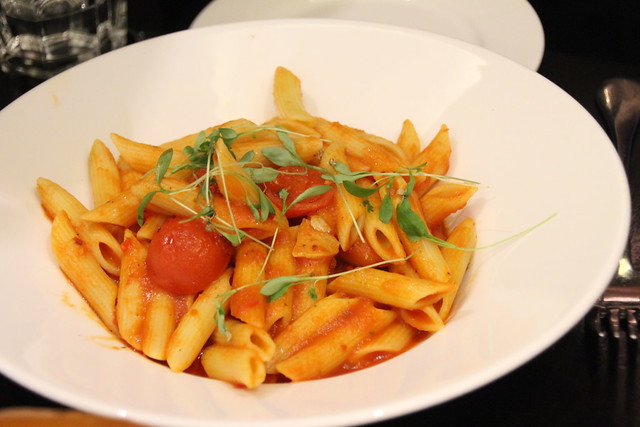 The Penne Arrabiata is a much safer option for anyone who doesn’t like mushrooms. I thought this dish was simple but satisfying. Although this comes with fresh chilli I would have liked a little extra kick to it. One of the other pasta dishes (which is only available as a main) I thought sounded good was the Canelloni Al Forno of Spinach and Ricotta. If you’re planning to go to Marco’s then look it up on the menu. 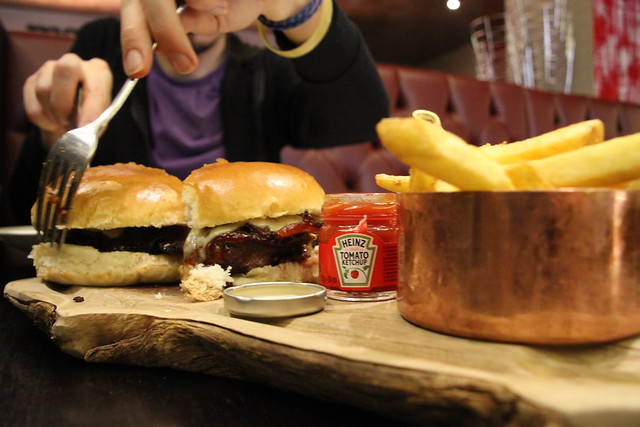 It had been a long time since I’d had a burger but I can confirm that the Great American Burger is very tasty. There was a generous layer of smokey sweet BBQ sauce, crispy bacon and Monterey Jack cheese. The chips were thick, crunchy on the outside and fluffy on the inside, perfect. I normally love chips but this time ’round I only managed couple. 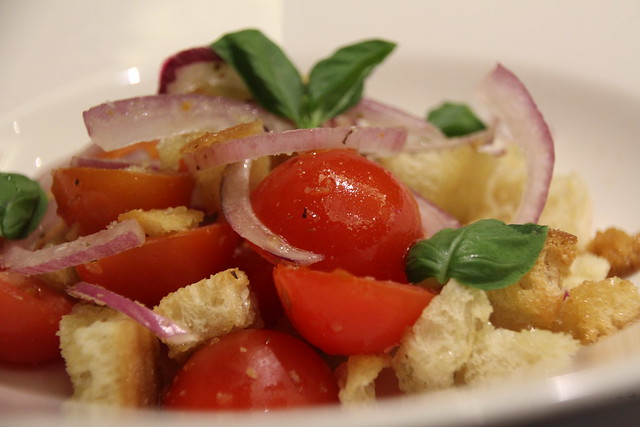 There was a lot of food on our table but the addition of the Panznella Salad was much welcomed. It was refreshing, crunchy and would go very well if you picked a pasta dish as your main. 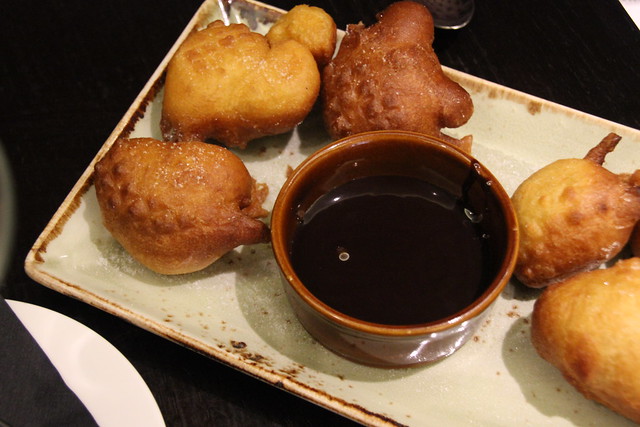 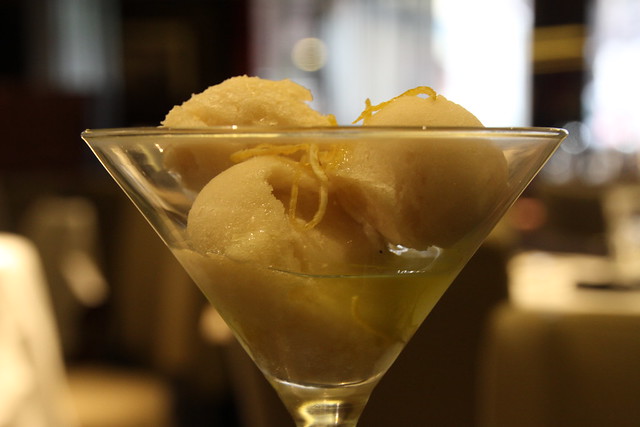 Normally I don’t go for a starter and dessert but in this situation it would have been rude not to. I was there to sample and share the menu with you after all. I was rather impressed by the dessert menu so it was hard to pick what we wanted. I went for the Sicilian Lemon Sorbet with frozen limoncello and Phil went for the Hot Italian Donuts. We shared, as always.

We spent so long taking photos of our desserts that by the time we got ’round to trying the donuts they were no longer hot. I managed one donut and it was fluffy on the inside and the rich chocolate sauce worked very well with it. I think that if we’d got ’round to trying them warm and dipping them into the gooey sauce they would have been even better. However, I don’t think either of us can give you true review of them. They did come highly reccomended by the waiters though.

The lemon sorbet was the star for us both. It was very zingy and was topped with crunchy sugared peel. Frozen limoncello had been poured all over it to give it an extra zing. It was the best dessert I’ve had in a long time and I will be having this on my next visit. The following week we actually tried to recreate this at home and while it was tasty it wasn’t quite the same as what we’d experienced at Marco’s. If you decide to go and try out the new menu then I highly recommend this dessert. 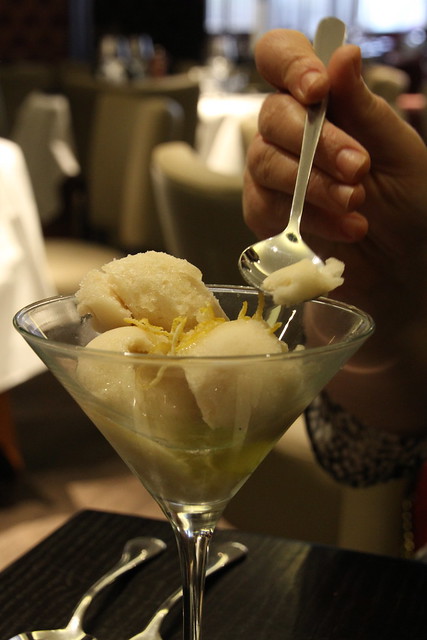 Have you been to Marco’s restaurant in New York?