Last night, 17 CEOs raised money and awareness for Action For Children by sleeping out on the streets of London. I first heard about the CEO Sleepout from AJ Joshi, someone you should all follow on Twitter. This is the third year of the CEO Sleepout and many have been taking part each year. You can find a full list of the CEO sleepers on the website, I’m sure you’ll recognise a few faces.

I personally think it’s a fantastic way to raise awareness and money for the charity. Yes, it’s just one night and the CEOs know they’ll be back home the following day. But it’s a good way of raising awareness that this is a way of life for some people. At least 80,000 young people experience homelessness in the UK every year and 60% become homeless due to family breakdowns. These statistics are heartbreaking. 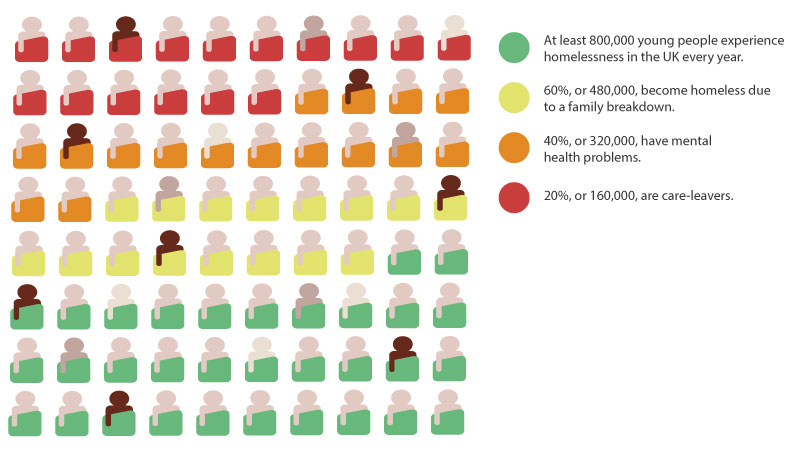 I did the best I could to demonstrate the stats in a little graphic.

I’d never heard of Action for Children before, despite the fact that they were founded over 145 years ago. The founder, Thomas Bowman Stephenson took the time to listen to homeless children living under the arches of Waterloo station. He then took action. The charity has been supporting children, parents and parents-to-be and pre-school children ever since. I encourage you to go and find out more about the charity and the fantastic work they do.

As always, AJ was on hand to Periscope the whole sleep out. I believe that Periscope can play a strong role in campaigns like this by encouraging live engagement. I had the chance to ask AJ a few questions about the importance of the campaign.

How do you think the campaign has gone so far?

I think the campaign was a phenomenal success. I believe the entire team raised close to £100,000 and 95p in every pound goes straight back to the services provided.

What role has Periscope played in it?

Being able to share this experience on Periscope was second to none, not only for the viewers but for us, sending a tweet or posting a pic is great but Periscope bridges the entire experience as it happens. There’s nothing quite like LIVE especially when it comes to sharing an experience like this.

What could the average person do to help?

Everyone can do something within their own community to help, no kind gesture is too small. Specifically to this project? Companies can get involved in Byte Night on 7th October 2016.

Thank you to AJ for taking the time to answer my questions.

Some of you may know that I’m a big supporter of charities focused on solving the homeless issues here in the UK and around the world. That’s why this campaign and Action For Children stood out to me and I wanted to share it with you.